At the 2019 annual NILOA meeting held in Baltimore MD, three NILOA officials were honored with awards in recognition for their service to the game of Lacrosse. 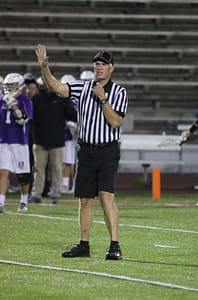 Wally Petry, a long time District 6 official, was presented with the Bernie Ulman Award.  This award is presented to an individual who has contributed to the continued success of intercollegiate lacrosse officiating and when applicable has made a meaningful contribution to the game of lacrosse. Petry has dedicated his life to growing the game of lacrosse at a grassroots level in Southwest Ohio.  He has mentored hundreds of officials and served as "true ambassador  of the game" in a variety of roles including multiple MCLA and state championships, as a US Lacrosse clinician and USL state coordinator for Ohio.  Accepting on his behalf was Ty Wilkinson.

Noel Turner was awarded the Frenchy Jullien Award.  The award is presented to an active or past member of the NILOA who has contributed to the continued success of the NILOA and, when applicable, has made a meaningful contribution to the game of lacrosse.

Turner's officiating career spanned from 1965-1990.  He served multiple roles in the in the Pennsylvania Delaware Lacrosse Officials Association, including president, treasurer and assignor.  He was inducted into the Pennsylvania Lacrosse Hall of Fame in 2013.  Turner officiated the NCAA Division III men's championship game in 1983, but is most remembered for his 23 year role as District 3 assignor where he mentored and developed numerous officials.  His goal was to "always put the best official on the field."

Tom Sutton was awarded the 2019 Jake Curran Award. Sutton has officiated a gold medal game and served as referee-in-chief at the world championship.  He has traveled the world as a coach and mentor. He served as chair of the officials committee and edited the men's field and indoor rulebooks.  Sutton was recently named Chair of Officiating for World Lacrosse,overseeing the men's, women's, and indoor game.

Created in 2015, this award is presented by US Lacrosse in order to recognize the contribution of US officials to the growth of the international game.  Previous winners include Walt Munze and Al Blau.

Jake Curran was a founding member of the International Federation of Lacrosse Referees Association and served as the group’s first President.  He co-authored the playing first set of international rules.  Curran was the recipient of many awards including the Silver and Gold Whistle Award in New York, the Frenchy Julien Award, and the International Lacrosse Federation Development Committee Award. In 2015, he was inducted into the National Lacrosse Hall of Fame. Curran passed away in the spring of 2018.